The Open Benchtable BC1 V2 will replace the existing V1.1 design and comes in 3 colors: Black, Silver, and Titanium.

It’s been quite the Open Benchtable journey from the first conversations in June 2015 at the Computex trade show, over the prototypes tested during the 2016 HWBOT World Tour, to our latest V2 iteration launching in the fourth quarter of 2021.

We are proud to say that during our many interactions with customers, supporters, enthusiasts, PC DIY aficionados, industry partners, and system builders around the world, we have learned so much about everything that makes the Open Benchtable great and all the things it wasn’t so great at yet.

We’re never shy to accept feedback, good or bad, and always look to improve the Open Benchtable product family. As you’ll find out in the sections below, the Open Benchtable underwent quite a transformation from the 2016 V0.1 to our 2021 V2. For V2 we incorporated as much of the feedback as possible to develop the best Open Benchtable to date.

In our admittedly slightly biased opinion, the result is simply spectacular. The new Open Benchtable BC1 V2 is designed to be more robust, simpler, and more practical to use for everyday PC enthusiasts.

Although the OBT BC1 V2 has undergone a significant re-design, it was important to stay true to the winning formula and maintain design continuity. The footprint, size, look, and construction will feel entirely familiar to current users and the custom screws will still work on all versions

We have implemented several small design revisions which will help further extend the lifespan of the benchtable itself. We also meticulously evaluated the entire supply chain process to not only incorporate lower-waste processes but also overall reduce the environmental impact of the Open Benchtable production.

The Built To Last attitude doesn’t just apply to the Open Benchtable products; it also applies to our planet. Therefore, Open Benchtable joins our partner Streacom in its commitment to offset the environmental impact by reducing waste from smarter packaging and their partnership with the Eden Reforestation Project.

The Open Benchtable BC1 V2 incorporates support for a vertical Demo Mode which allows users to set up their Open Benchtable upright. No life hacks are needed, no dodgy prop-up solution is needed to make your gear stand out to all.

Since its inception, the Open Benchtable has been using the same nuts and screws. While we’ve kept all of the assembly 100% toolless, this significant upgrade improves the V2 durability and long-term use.

To further improve durability, we removed threads made directly into the side of the benchtable. Not only does the screw+nut design ensure all mounting points on the table are much stronger, but also, replacement, in case of damage to the thread, is now possible. Users that mount heavy hardware or require ultra-tight mount can now apply high torque with tools to securely mount anything to the table.

Brackets, which evolved from V1 to V1.1, continue to change. The V2 twin-design bracket allows users to mount two items (upper and lower) from a single location. This also doubles up the usable mount location on the table.

We also included a much-requested feature by our community: a location to mount the Power On button. These two 12mm holes carved in the table give users that do not have power and reset buttons on-board a solution to add their own.

Even More New Features and Improvements

We could be talking to you about the V2 for much longer. The list of changes is extensive, so to keep it short, here are some of the other changes:

In addition to the OBT BC1 V2, today we are also announcing the Open Benchtable BC1 Mini V2. The Mini is the ITX small-form-factor version of the ATX-size BC1.

Both the OBT BC1 V2 and OBT BC1 Mini V2 will be available in three colors: Black, Silver, and Titanium. 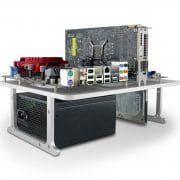 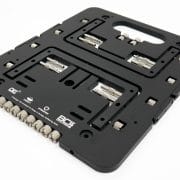 A New Mini Member of the Family: OBT BC1-Mini 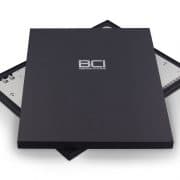 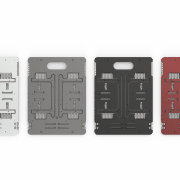 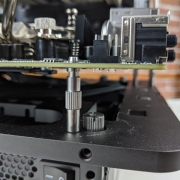 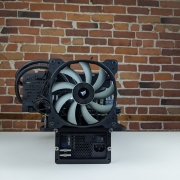